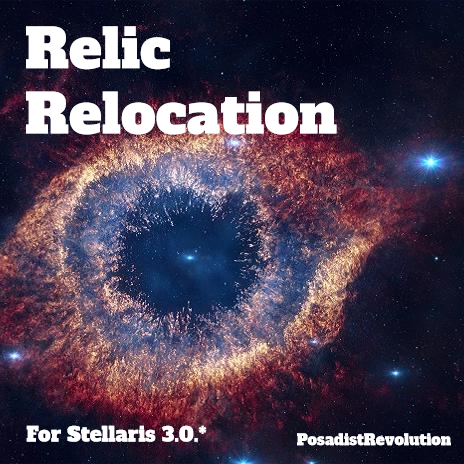 This is a fork of Raffaele’s “Relic Raider” mod updated for 3.0. So far, the only changes are:
1. Edited the relic claiming casus belli so you only have the casus belli on other empires if you have current intel on what relics they have. The way this works as far as I can tell is that once you have the casus belli, in your diplomacy screen it shows up with *every* empire whose CBs you can see having the relic claiming CB, as well as every empire whose CBs you can see having the “claim relic” CB on you (when you have a relic), so I *think* it doesn’t reveal anything about where other empires are establishing spy networks. If anybody finds out otherwise, please let me know.
2. Cleaned up some of the English localization.

I don’t speak any other languages and am just using the simplified Chinese localization from Raffaele’s mod, so if anybody wants to add a localization for a language they speak, shoot me a message!

This mod doesn’t modify any vanilla files (yet…) and shouldn’t affect compatibility with any other mods.

Progress goals:
1. Add a way for empires to trade relics in the diplomacy menu
2. Rebalance how empires of different types value different relics in trade
3. Add a multi-stage “Heist” espionage operation with many different outcomes requiring many different assets to steal a relic from another empire
4. Allow empires to go to war over relics with stale intel, and add some events for if all their relics are taken between the intel gathering and the war’s “victory”
5. Add a new UI for actually viewing what relics another empire has
6. Automatically take all relics from vassals you integrate