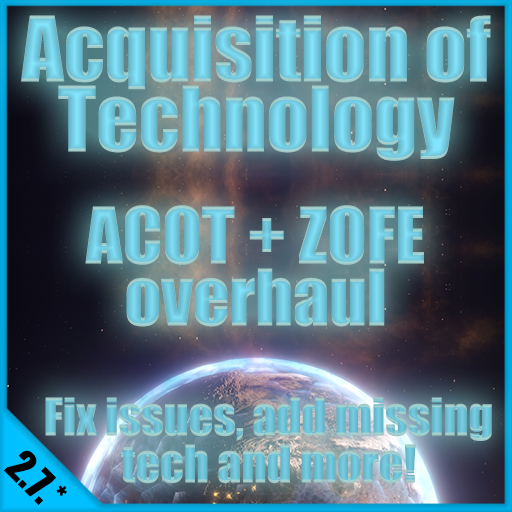 If you liked the Zenith of Fallen Empires (ZOFE) and the Ancient Cache of Technologies (ACOT) mod, you may have noticed that when playing both mods together there exist some oddities. This mod aims to remedy that to provide the best possible gameplay experience when playing ZOFE and ACOT.

For example once you acquire Dark Matter from ACOT you still can’t build the Dark Matter capital building nor the Giga Fortress or the Aegis Complex. Also when becoming an Ascended Empire via the ZOFE mod, then some buildings still use the vanilla icons eventhough the ACOT icons look much cooler. Another mod that I also liked is the planetary shields mod but unfortunately building the ACOT shield buildings removes the pretty shield FX. So in this mod I added my own custom shield FX for both the Dark Matter and the Dark Energy (Sky Shield) installation to add the extra bling to your empire.

Another issue I ran into was the method of acquistion for the precursor databank. You either had to steal it from the fallen empires or hump their legs and beg for access. What if you are playing without any fallen empires around? What if you just like to sit in your corner of the galaxy and research the living hell out the research tree? You’re out of luck buddy. NOT COOL.

So if you sit in front of your computer and nod your head in agreement, then this mod is for you!

This mod overwrites pdxmesh.shader so it’s incompatible with any mod that does the same.

I added full support for the Event Horizon Offset Facility (EHOF) though.

Q: Can I run this without ZOFE?
A: Yes, somewhat. You will miss out some features though and also have no guarantees on bug-free-ness, as this mod was designed specifically around using ACOT and ZOFE together.

Q: Can I run this mod without ACOT?
A: No. It will crash during the loading screen.