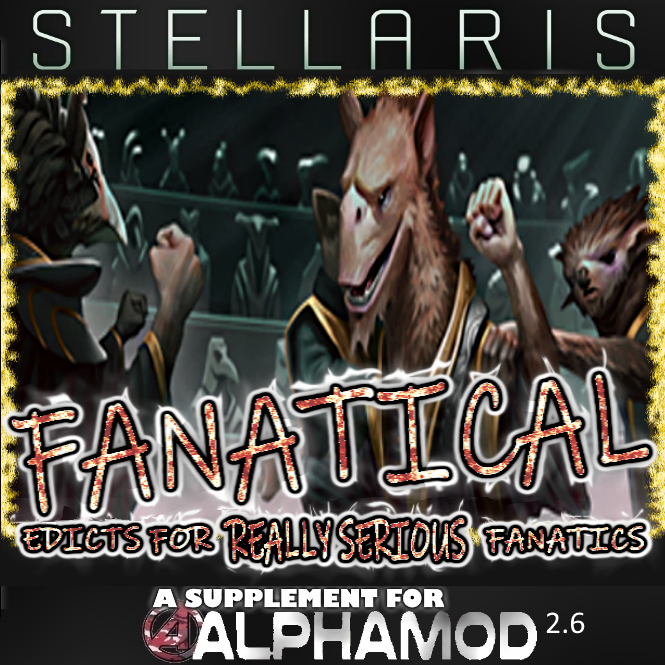 I’ve never really felt like there was a good reason to play an empire with a fanatic ethic, considering the benefits of having three non-fanatic ethics. Other than maybe for a roleplaying run.

So, here’s eight new edicts, one for each of the fanatic ethics, to provide a little more oomph to an empire with a fanatic ethic. These Powers of Fanaticism currently cost Wealth (likely to change, see Plans below) and have a loooong duration.

There’s also another eight new edicts, one for each ethic (fanatic or not) that allow an empire with a surplus of Influence income (yes, it does happen) to direct some of that Influence to promoting an ethic and producing some Unity. They have a relatively short duration.

See the slideshow for full details of the edict effects.

PLANS
I’m considering re-introducing unique resources for each ethic again in AlphaMod, so Wealth may well be replaced with a more appropriate cost for some edicts, decisions and so on.

I’m also developing some sub-edicts unlocked by the Power of Fanaticism, a Promotion and a Crackdown for each, that will provide more characterful ways to be fanatical about fanaticism.

COMPATIBILITY
Built against Stellaris v2.6.3.
Requires AlphaMod 2.6.
Doesn’t touch any vanilla files, so you can chuck it into the load order pretty much where-ever. After AlphaMod’s other supplements is recommended for future-proofing.