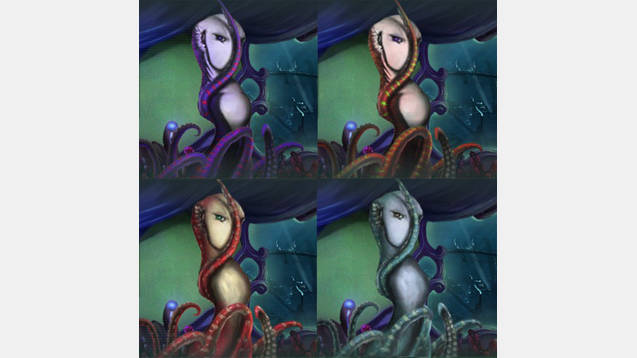 Custom City Set
Underwater metropolis. Used in my Custom Empire, but can be used for any other Empire you create. The city will appear regardless of the planet type but only after you’ve created enough buildings on the planet tiles.

Custom AI Personality
If my Custom Empire (and only that one) of Octee-lans is moved by the AI, it will acquire by default the Interstellar Pursuers personality. It makes the AI both very friendly in regards of trade and alliances, but also very prone on waging wars of conquest. It is also paired with about 50 new lines of dialogue for the various diplomatic messages, which provide multiple reactions for each vanilla species_class.
If you use my Custom Empire, you’ll still have access to some of this content through the custom insults that your diplomat will be able to send to other empires.

Custom Empire
The Kuri-octa-Xibi. It’s a Despotic Empire, authoritarian/fanatic xenophile. Since this mod does not add any gameplay, I’ve set this Empire as capable of spawning on its own (although it won’t spawn always), unless the player is using it, in which case it will never spawn.
If you wish to disable the Empire from spawning without using it yourself, you need to either disable the mod before starting up Stellaris, or go to the mod folder (Steam/SteamApps/workshop/content/281990/… /octeelan_portraits/prescripted_countries/) open the octeelan_prescripted_countries file, search for spawn_enabled=yes, and edit it to: spawn_enabled=no.
You can also edit it to: spawn_enabled=always, if you wish the Kuri-octa-Xibi to always be spawned in your games (although it’ll still be automatically disabled if you are using it yourself, in order to avoid having twin empires).

Compatibility
This mod does not affect any vanilla files, nor does it add any gameplay feature. I don’t think it should cause any conflict with most other mods, although there might be exceptions I haven’t thought of.