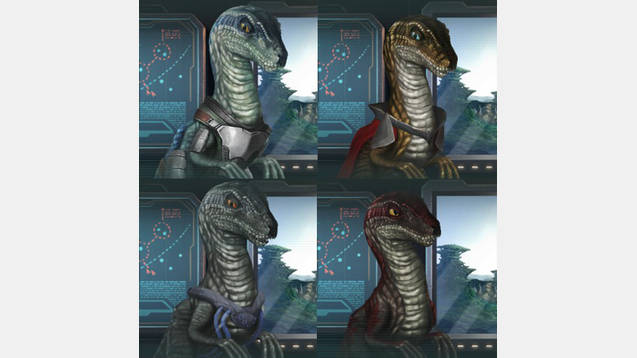 Contents
Animated Portrait Set
Fully animated space dromaeosaurid portrait set. Because dinosaurs.
They twitch, and blink, and look around, and breathe, just like vanilla portraits. They have different clothes and coloring, and slight sexual dimorphism (females have dimmer color patterns and are slightly bigger).
You can easily use this set to create any Custom Empire you like, just like for the vanilla portraits.

Custom City Set
Space Aztec inspired. Used in my Custom Empire, but can be used for any other Empire you create.

Custom Flag
The skeletal paw of a Velociraptor, with the iconic sickle claw.

Custom Starting Solar System
The Twin Quarks: a binary solar system of red stars. The starting planet is within the asteroid belt; your tiles start surrounded by jungle, but the asteroids in the system can be mined for resources.

Custom AI Personality
If my Custom Empire (and only that one) of Astroraptors is moved by the AI, it will acquire by default the Pretentious Conquerors personality. It makes the AI focus on hull and speed for his ships, and prefer conquest and subjugation over colonization. It is also paired with about 70 new lines of dialogue for the various diplomatic messages, which provide multiple reactions for each vanilla species_class.
If you use my Custom Empire, you’ll still have access to some of this content through the tailored custom insults that your diplomat will be able to send to other empires.

Custom Empire
The Glorious Crescent. It’s a Military Junta, xenophobe/fanatic militarist. Since this mod does not add any gameplay, I’ve set this Empire as capable of spawning on its own (although it won’t spawn always), unless the player is using it, in which case it will never spawn.
If you wish to disable the Empire from spawning without using it yourself, you need to either disable the mod before starting up Stellaris, or go to the mod folder (Steam/SteamApps/workshop/content/281990/… /saurischian_portraits/prescripted_countries/) open the saurischian_prescripted_countries file, search for spawn_enabled=yes, and edit it to: spawn_enabled=no.
You can also edit it to: spawn_enabled=always, if you wish the Glorious Crescent to always be spawned in your games (although it’ll still be automatically disabled if you are using it yourself, in order to avoid having twin empires).

Why no feathers?
I’ll put this on in advance, since I imagine the topic will come up, eventually. I wanted to make females featherless and males with feather crests originally, but the mesh I was using to animate them cut them off, so I had to settle on no feathers at all.
I am aware real Dromaeosaurids had feathers. They also had a shorter neck, and a narrower snout, and differently placed hands. This still remains a fictional, alien species.

Compatibility
This mod does not affect any vanilla files, nor does it add any gameplay feature. I don’t think it should cause any conflict with most other mods, although there might be exceptions I haven’t thought of.