Civics Variety Pack For for Stellaris 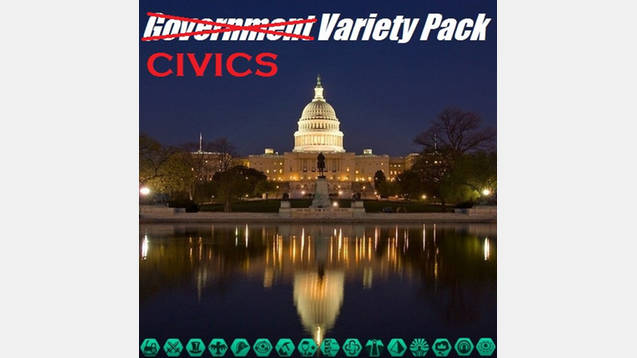 Civics Variety Pack For for Stellaris

A grab bag of new civics.

This is a “civics-only” version of my Government Variety Pack mod. It is SUPER INCOMPATIBLE with that mod too, there will be duplicate entries, cats marrying dogs, chaos reigns, etc. Don’t use them together, use one or the other!

There are 20 new civic choices, hand-crafted in a ridiculously obsessive-compulsive quest to fill unused government/ethic niches with whatever modifiers I could semi-plausibly cram in.

Elected Clergy (Democratic, Spiritualist) – In this society’s religion, local priests are elected by their congregations. Doctrine is varied and open to consensus interpretation. (+25% planetary edict duration)
Ascetic Virtues (Not Materialist) – This culture’s religious beliefs include strict dietary and exercise requirements which help the body as much as the mind. (+10 years to leader age, +5% growth rate)
Republicanism (Democratic) – This society believes that the greatest virtue is attained by people of good character serving the common good. (+25% leader experience gain, +2 leader pool size)
Utilitarian Planning (Dictatorship, not Spiritualist) – The dictatorship is concerned with doing the greatest good for the greatest number by rational calculation of resource allocation. (-10% pop food requirements, -10% resettlement cost)
Grandiosity (Dictatorial) – In this society, one can’t be taken seriously as a dictator without building some big military hardware. (Enables oversized stations and ships)
Universal Sovereignty (Dictatorial or Imperial, not Xenophobic) – The ruler has an inclusive ideology that embraces all forms of sentient life… as future subjects. (-10% vassal integration cost, -20% vassal integration cooldown (NOTE: No idea why the cooldown shows up red text in the tooltip, everywhere else in the game negative values for this modifier are beneficial))
Workers’ Councils (Egalitarian, no Business Lobby) – Trade unions, democratic workplaces, and cooperatives are a vital part of civil society and an integral part of government. (-10% building and ship construction time)
Supremacist Demagoguery (Dictatorship or Democracy, not Xenophile and not Egalitarian) – The government manipulates the population with saber rattling rhetoric and appeals to common prejudices and fears. (+10% rivalry influence gain, +20% army morale damage)
Enlightened Liberalism (Not Spiritualist, not Fanatic Authoritarian) – This society values personal rights, individual enterprise, advancing knowledge, and technical innovation. A culture for true captains of industry. (-20% research and mining station cost)
Business Lobby (Not Democratic, no Workers’ Councils) – This society’s economy is dominated by entrenched business interests that benefit from lucrative kickback contracts, regulatory loopholes, and wage suppression. (+5% mineral and energy output)
Chivalry (Imperial, Militarist) – Ideals of martial valor and honorable conduct define ruling class culture. (+20% army morale, +1 military leader levels)
Lifelong Learning (Democratic and Pacifist) – This society values public education so strongly that opportunities for learning and development are made available throughout citizens’ lives. (-15% scientist recruit cost, +15% survey speed)
Institutionalized Collectivism (Not Democratic, Materialist) – The regime operates by state control of industry and infrastructure. (-5% slave unhappiness, -5% ship upkeep)
Direct Revelation (Egalitarian or Pacifist, and Spiritualist) – The religious culture of this society values insights from personal experiences of the divine. (-20% expansion effect on Tradition cost)
Royal Absolutism (Imperial, Authoritarian) – The monarch is the state, whose will is law without limit. (-25% to Governing Ethics Attraction penalty due to distance)
Public Works (Any) – A system of public employment makes labor power available for many tasks. (-15% clear tile blocker cost, +5% habitability)
Imperial Economy (Dictatorial/Imperial, not Xenophile) – This empire exploits its vassals ruthlessly. (+15% subject research share, +5% tributary income)
Colonial Fiefs (Imperial, not Militarist) – The monarch is willing to grant landholding rights to those bold enough to colonize new worlds. (+15% colony development speed, -15% expansion influence cost)
Automated Indolence (Materialist) – This society, very early on in its industrial revolution, decided to deal with questions of labor and inequality by ‘letting machines do the work’ as much as possible and its social structure and technical focus has adapted to match. (-5% Unrest, +10% robot output)
State Secular Rationalism (Dictatorial and Materialist) – The dictatorship sees religion as a destabilizing and divisive force and discourages its practice (and/or encourages inter-religious toleration) through a variety of means. (+10% Governing ethics attraction, −10% Tradition Cost from Xeno Pops)
Special Thanks

ICONS:Wanna give a HUGE THANK YOU to Meltup for making unique icons for the new civics. They look cool and I am super happy someone stepped up to help out with this.

TRANSLATIONS: Steam user [FRANCE] PAYAN has made a French translation of the main mod. It is probably a little out of date and I’m not totally sure whether it will work with the civics-only version, but it might be better than not having it at all for any French speakers.

So, at one point I tried to do some shenanigans with duplicate versions of civics to get around a restriction in how Stellaris formats civic requirements. This introduced a lot of weird issues. I undid this but left intact “legacy” versions of the no-longer-needed civics that can only be seen by empires that already have them (i.e., can’t be selected at start, will continue to exist for empires that have them in saved games). This may also result in duplicates showing up sometimes. Your game’s not broken, you’re just seeing vestigial crap.
Compatibility

The field of civics mods has gotten more crowded, so I figured it would make sense to make a note about compatibility. This mod only adds new things to the game, in new files. There’s no possibility of my mod conflicting with another due to both editing base game files. That said, there’s no guarantee that all the civic combinations between my mods and others will make sense or be balanced. Also, if a mod radically changes the way ethics work (especially renaming the base ethics), compatibility will be shaky at best.