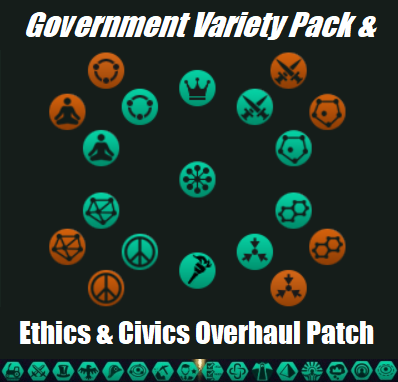 This mod provides some degree of compatibility between my mod, , and the Ethics and Civics Overhaul mods (both and ). Its main function is to change the definitions of governments and civics I’ve added to make them respond sensibly to the changes to ethics and new authority. Basically so you don’t get Fanatic Capitalist Workers’ Councils or something, and so Democratic civics can work with Direct Democracy.

You should probably not drop this into a game in progress if you’ve been using GVP and E&CO, this may invalidate a bunch of GVP civics. Use when starting a new game with both mods unless you’ve reviewed the changes and accept the risks.

You do need to ensure that the load order causes this patch to take precedence over GVP, and I don’t know how to do this for sure in the wacky new mod loader Paradox uses. I believe it goes by subscribe order (last subscribed takes precedence), but you can also control it with a mod manager.

This is the list of current changes to GVP based on E&CO ethics. Note that any requirements listed are in addition to the base GVP requirements. See the changelog for historical changes as they happened in updates.

PLEASE NOTE: This is a very rough patch, I have not really tested it. The changes it makes are so basic (just adding new requirements) that it seemed hard to mess up… but that doesn’t mean I didn’t mess anything up. If anything is not working as described here, let me know!