Fox Sensor For for Stellaris 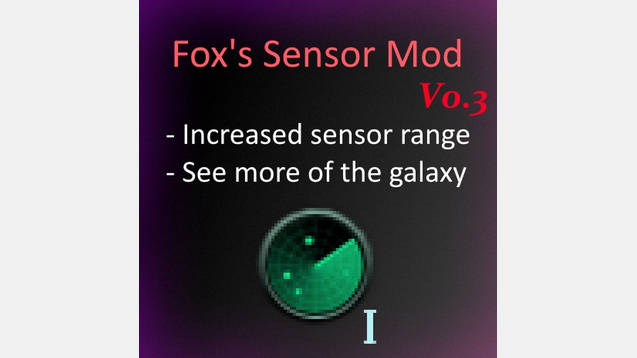 Fox Sensor For for Stellaris

Originally posted by author:
We seek to see further into the stars.

This mod basically increases the range of the in-game sensors to make them more meaningful and give you more information on your neighbors; station sensors have also received a nice boost. With this mod you should be able to see your neighboring systems a bit better and, hopefully, be less surprised by hostile invasion fleets.

Update 0.2 makes stations MUCH more valuable and relevant by increasing their range by 20-25%.

Specifics:
I’ve increased the range of sensors as follows:

V0.3
– Added a very small power cost to using the higher tier versions. They are no more expensive than a small weapon slot. Let me know if you like or dislike this change.

V0.2
– I increasing the range of the station sensors by about 20-25%. it suddenly gives them a much greater importance as they can see much further then fleets. It also makes sense that stations would have the best sensors. This should work well with the latest 1.0.2 patch released.

Compatibility:
– Shouldn’t work with other mods that modify the base-game sensors.