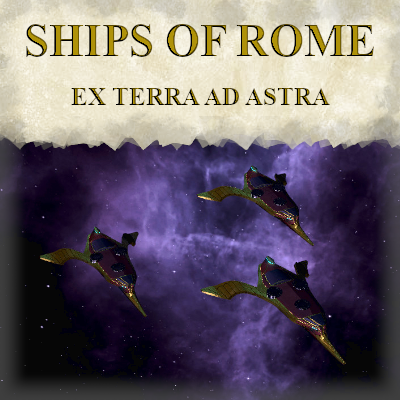 Ships of Rome adds a fully featured ship set to Stellaris, with designs based upon the ships and architecture of the Roman Empire. Perfect for those who want graphics to go with the Stellaris’ Roman name list, this mod also includes Roman-themed versions of the vanilla leader portraits, and a pre-generated Roman Empire.

Should you want to set up your own version of Rome before starting a game, note that the Roman portraits and flag emblem are listed under “Roman” in the species creator.

Ships of Rome is now compatible with NSC. Other mods that add new ship types may still have issues. Aside from that, there are no major compatibility issues that I am currently aware of. Some mods which effect habitats may cause textures to display incorrectly, but as far as I know this is a general issue unrelated to this particular mod.

Of course, if you do run into any issues that are not related to cross-mod compatibility, feel free to mention it in the comments below. I’ll try to get it sorted out as soon as I have the chance.

I’d like to give a quick thanks to the folks down at the Stellaris Modding Den for their advice and feedback during development; and to you for checking out this mod!