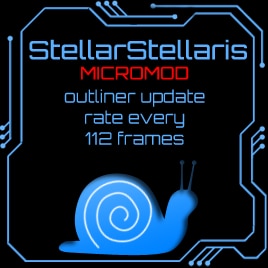 This is a micromod in the StellarStellaris Outliner update frequency series. It is not incompatible with any other mods (except the other series mods, as they update the same thing). It can be applied or removed at any time. All it does is change the define that sets the rate at which the outliner updates, which in late game can have a performance penalty. You’ll notice it the most when collapsing or expanding outliner sections which will be delayed until an update happens. Choose whichever micromod that sets the rate you prefer.

You can evaluate the current performance impact in game by looking at 3dstats (console command), with the game paused, zoomed into a system where you’re looking at nothing you should see a spike every 7 frames by default. If your spike is large you may benefit from these micromods. On my test game (2500 stars, year 2375, 40-ish mods, 4000 pops) The default update frequency lowers the framerate from 60 to 40 fps.

The default rate is once every 7 frames.

My mods are intended to improve or tweak performance characteristics of Stellaris.

My Patreon if you feel so inclined: