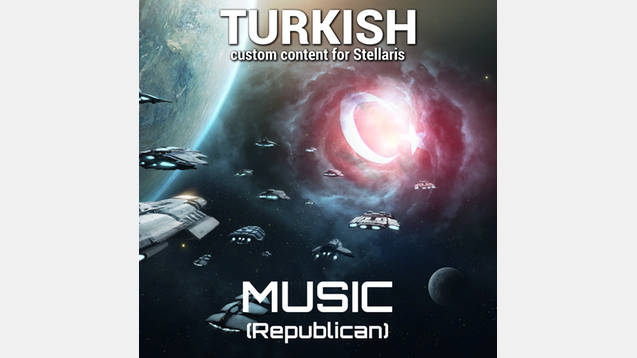 My 2nd mod for Stellaris, featuring military-themed music from the Republican period (1923-…) of Turkey’s history. Not sure how it goes with a sci-fi grand strategy game, but at least it goes well with my Turkish Emblems mod and a militarist playthrough. Unless specified otherwise, all tracks have been recorded by the Turkish Armed Forces Band. The tracks with a * are from the soundtrack to Kurtuluş, a 1994 miniseries about the Turkish War for National Liberation.

This mod is made for the sole purposes of providing Stellaris with custom content, and is in no way intended to promote or condemn any ethnicity, nationality, ideology or way of policy. Due to obvious thematic conflicts, future music packs with Turkish socialist music or Ottoman military music will be separate.

All tracks have been converted from 128kbps .mp3 files. Lowering the music volume at least by half is recommended. Vanilla Music Disabler also recommended.