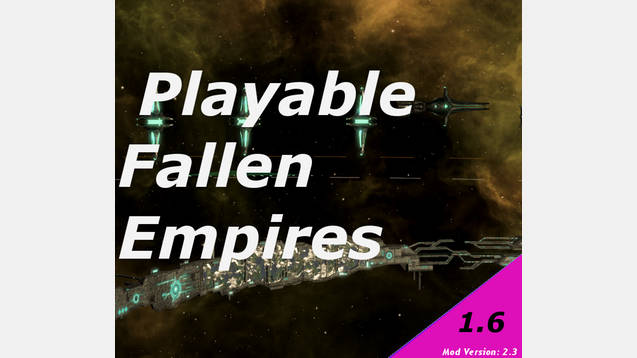 You are new with this mod? You should read this information first!

IMPORTANT INFORMATION (UPDATE TO 2.3 mod version)
For compability improvements, the mod name has been modfied. It will appear at the top of the modlist now
Awakening of Fallen Empires is possible with researching awakening techs for each Fallen Empire Type or with an ascension Perk which awakes all!
Use the “Time Warp” edict to speed up the development of default empires to have them faster in endgame stadium!
Try out the new Difficulties by researching the difficulty techs in the society Category! IMPORTANT: The difficulty techs are accumulative. If you research all it will be super mega heavy even more then Death Garantuee. ATTENTION: Because the difficulties will make that the fallen empire has even more ships this could lead to performance issues for some people.
You can now trigger the Prethoryn Scourge or AI Rebellion with techs you can find in society category. Extradimensionals will come soon!
New Ship and City Designs were added! AI Blue Fallen Empire and AI Red Fallen empire design!
Robot portrait can be chosen now in the appearance collection
IMPORTANT INFORMATION
The game might/will lag on the first day as the game grants you all technologies. Simply wait for the lag to pass.
Your empire will be given a 5-year starting buff to allow you to populate and expand your empire (to simulate a mature empire). Instant construction, tile blocker removal, bonus damage, and more are given to you with this buff. HOWEVER, the buff will be removed after 5 years, and so will the bonuses. Your population will cease procreating after the buff expires, as fallen empires cannot procreate until they awaken.
You may have problems with Spiritualist fallen empires when colonizing holy worlds. If it occurs, this is unavoidable, but it may not occur in your game.
When playing as a fallen empire, only use fallen empire ship designs! Using graphics or designs, such as Mammalian designs, will cause graphical errors and bugs when building Titans, Citadels, and other Fallen Empire-unique structures.
Because you are able to create multiple Fallen Empire species, it is possible to play a game where every empire is a fallen empire. Simply set your custom Fallen Empire species to Always Appear In Game.
You may see strange, untextured cubes in your systems: ignore them! They will disappear a few days in to the game.
You have two additional trait points you can use to customize your species. This is able to be done through genetic modification in-game.
The diplomacy options for Fallen Empires are rather limited in comparison to standard empires.
Special Thanks
Zeratul Vergil – Assets from his “Erebus Fallen Ship mod” for the pacifist ship design.
Are you interested in matching weapons for the diffrent ship color variants? Try this!

You have modding experience and like this mod? Join our team!
This mod has a great potential and we are looking forward to create new content. Thus we appectiate new people in our team who want to help us achieving great things! 🙂
If you are interested write a comment so we can add you and talk about things that can be done.