Xenology – Traits Expansion For for Stellaris 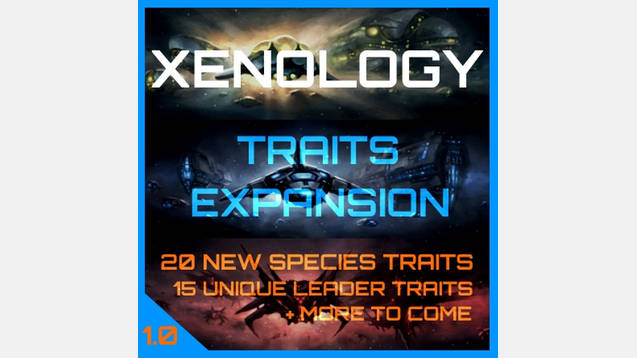 Xenology – Traits Expansion For for Stellaris

Xenology – Traits Expansion offers 20 diverse and exciting new traits to choose from in empire creation, as well as 15 special leader perks, each unique to their own species’ attributes.
All Species and Leader traits detailed in Current Traits [1.0] thread!
DLC requirements removed for now, but still untested without Utopia. Please notify me if you encounter any issues.
Description
XTE aims to make every species fully unique, with its own strengths and weaknesses. Some may be excellent explorers, others steadfast defenders. Some even have gift of immortality, and others yet are born inept and dimwitted. No two alien species are alike. Most positive traits even have a chance to generate special leaders with even greater bonuses, incentivizing the violent conquest or peaceful assimilation of alien races, adding their unique characteristics to your own!

I was always somewhat annoyed by how insignificant species traits felt in Stellaris, and how little of an impact on the flow of the game these could make. Now, your starting traits are at least as important as the set of ethics you pick!

Compatibility
XTE is unlikely to be compatible with other mods that alter the 00_species_traits.txt file (although fortunately, most of them are contained in their own .txt file), which was needed to add the corresponding opposite to each trait and ensure special leaders traits would not just spawn for any species, though it is more likely to overwrite conflicting mods than to cause any crashes. I’ll try to fix this issue in the future.

Beyond that, it seems to work perfectly with popular mods such as ISB.

Frequently Asked Questions
Does the AI use the new traits?
Yes! Though it may not always pick the right leaders (I’m not sure if the ai_weight modifiers works for non-scientist leaders) and it will never choose the three planet preference maluses. Also, the more expensive traits are only rarely picked by the AI (you may see only one or at most two of each on a huge map with maxed empire count). That may be altered in the future.

How balanced are the new traits?
Though I have yet to extensively test XTE, nothing should be game breaking at the moment. Large bonuses are offset by a very high point costs, forcing you to pick negative traits as well. However, I consider Hygro/Xero/Cryophile to be “challenge” traits, since they significantly slow down your expansion. The AI will never pick these.

Why are the new species traits so expensive?
Keep in mind most beneficial traits unlock special leaders, with their own unique bonuses. Unfortunately, the trait selection UI doesn’t give you much space for longer descriptions, so all new features are properly described in the Current Traits [1.0] thread.

Can I use genetic modification to add XTE traits?
You may remove any malus, but not add any XTE bonus. I may change this in the future.

Known Bugs
• Buying scientists with Scion of the Fallen and certain traditions actually -gives- you influence.

Credits
• UnironicWeeaboo for their help rebalancing this mod

Please be sure to leave a rating and don’t forget to comment if there’s something I need to improve.