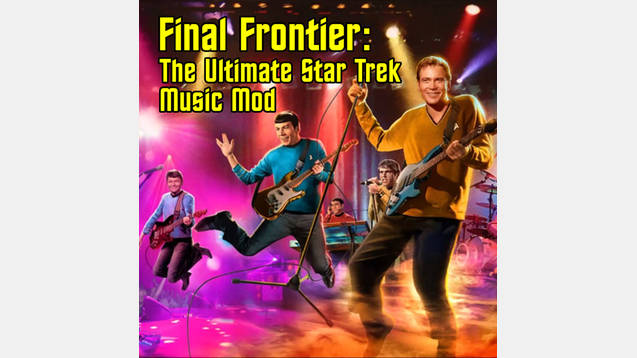 Welcome to Final Frontier: The Ultimate Star Trek Music Mod!
The idea for this mod came about while I was playing the great Star Trek: New Horizons but found Stellaris’s soundtrack to be somewhat ill-fitting for the tone of Gene Roddenberry’s wonderful science fiction universe. Because of this I found some amazing compilations of Star Trek OSTs by Tyrannicus on YouTube which I would alt tab out of the game, play on my browser then jump back into the game. However, then I thought why not learn some basic modding and put them into the game myself, and thus this mod was born! Like I said, all credit for the editing and compilation of the Star Trek OSTs goes to Tyrannicus, and I’ve linked his channel in the side bar. Go give all of his compilations a like!

So, what exactly is in this behemoth of a music mod?
Ten musical suites totalling over 9 hours of music from all eras of Trek from the Original Series through to the latest films.
As you’ll see in the ingame music player, I’ve added a small description to each of Tyrannicus’s Mega Suites, so you can cherry pick your favorite movie/show score to listen to while you explore strange new worlds.
Conquering the galaxy for the glory of the Klingon Empire or reaching more logical diplomatic solutions as the Vulcans? No matter which, I’ve also included Tyrannicus’s three themed suites to immerse yourself in the Star Trek universe.
Just want the most iconic Trek themes? No worries, I’ve also included Tyrannicus’s 50th Anniversary suite which highlights some of the most recognizable musical cues from Trek history.
I hope you enjoy what is my first foray into the modding scene. Constructive feedback is always appreciated!

Since you all have requested it, here is the link to the image I used for the thumbnail and mod picture. [i.ytimg.com] Enjoy!

F.A.Q.
“Is this mod compatible with other music mods and Star Trek: New Horizons?”
Yes, in fact I’ve designed it specifically because of STNH. Neither that mod’s, the vanilla game’s, nor any other mod’s music is overwritten by my mod.

“Where’s music from DS9 and Voyager?”
Unfortunately, Tyrannicus has yet to release part 6 of his Star Trek music series which is the installment that will contain those shows. Tyrannicus has stated that he intends to release it by the end of the summer, and when that time comes, I’ll see to adding it to the mod.

“Can you add _______ to the mod?”
I’m always welcome to suggestions; however I would like to maintain the format of adding large suites to the mod and avoid adding things on a track by track basis. Also, I do not have any background in music editing, but if there is serious interest shown, I’ll look into it.

Legal Disclaimer:
I claim no ownership over any of the music found within this mod. It is a fan made compilation of music from various Star Trek properties. “Star Trek” and all related characters, music, etc. are properties of their respective copyright holders.